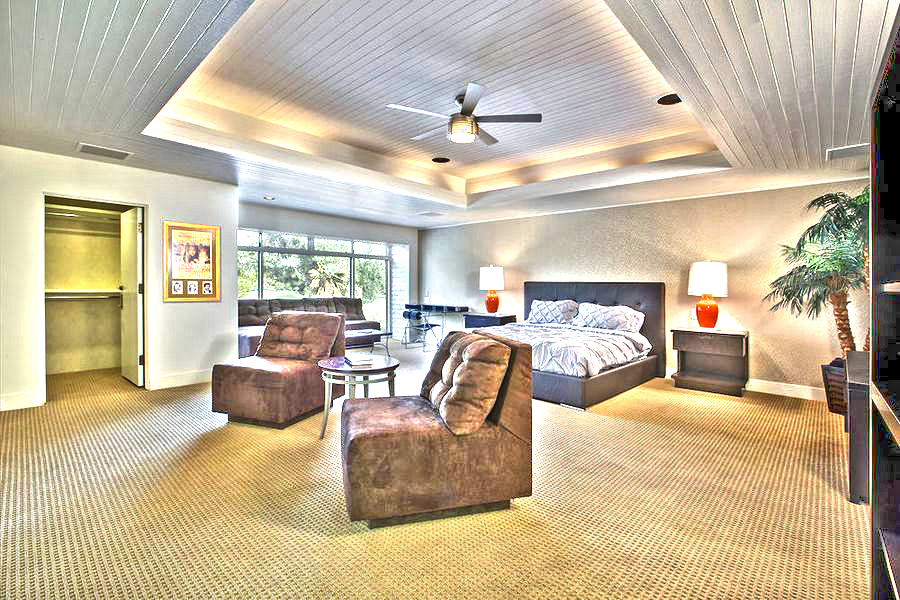 Sometimes, it takes a house listing with a bullet hole to bring back a little Las Vegas history.

The home has a bullet-proof glass wall extending from ceiling to floor behind the staircase. Outside is the 10th tee of the gated community’s golf course where, allegedly, FBI planes landed. The chipped glass, long suspected to be a bullet hole, along with the midcentury modern architecture have been preserved by all the previous owners.

In the garage is a small box of modern technology for a smart home next to a clunky system three times its size — the 1970s version of a smart home. Today, the dwelling is outfitted with a Savant smart-home system, which is controlled by the owner’s smartphone.

Rosenthal, who illegally and with mob influence operated four Las Vegas casinos — the Stardust, Fremont, Hacienda and Marina — from the home, had the place wired with the best technology of the day. He had the house outfitted with heavy front doors that are bullet-proof, sound-proof rooms (said to keep the FBI from hearing his conversations) and hidden gun compartments. Burns said after the neighbor’s home burned a few years ago, it was discovered the two residents were connected with a secret underground tunnel that held an empty safe.

The upstairs master bedroom, which is larger than some studio apartments, houses six closets that are long, mirrored and shallow. There are even more closets in the adjacent hallway. In the living room is a special, temperature-controlled closet that was once used for his wife’s furs. Geraldine McGee Rosenthal was a Las Vegas showgirl and a topless dancer. She died at 46 in 1982 in Los Angeles from an accidental drug overdose. Rosenthal also was known to be a clothes horse. It’s said he owned as many as 200 pairs of pants. The couple, who had two children, divorced in 1980.

The living room, which has a mirrored ceiling, leads to the pool. Off to the side is a swanky sunken bar. One of the owners added a window behind it to let in more sun.

Burns said Rosenthal hired Palm Springs designer Stephen Chase and spent about $500,000 to have the home restored in the mid-1970s after a fire. Wall art that Chase designed remains in the dining and living rooms.

Most people remember Rosenthal as the character that Robert De Niro played in the 1995 movie “Casino” (the house featured in the movie was a much larger one on Desert Inn Road.)

He was the man who invented casino sports books and was the first to hire women blackjack dealers. He would later be blacklisted for life from Nevada casinos.

But for most longtime Las Vegans, he is the guy who walked away from a 1982 car bombing in a Tony Roma’s parking lot on Sahara Avenue, a few blocks from the house.

The Tony Roma’s restaurant has been shuttered for a few years; and, in 2008, Rosenthal died in his Miami Beach, Fla., home where he had lived since the 1980s. He was 79.

But that bullet hole remains.